Training any horse takes a period of time.  First, their foundation must be secure.  Then add layer to layer, never progressing faster than your horse can comfortably absorb.  The training process has to be about bringing out the best in your horse. 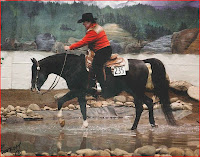 If you take time, good things can and do happen.  Firstly, you can truly assess your horse's personality and his ability to do the job.  Secondly, you will not become their adversary.  On the contrary, your horse will probably learn to enjoy his work (assuming he has the aptitude for it).  Remember, horses are achievers and good working horses are bred to work.  Take the time to find out what your horse is able to do and likes to do.  Don't force it, don't try to make a reining horse out of a hunter pleasure prospect, etc.
And don't forget to take a little extra time to vary your horse's routine.  It really helps them learn and keeps them fresh and interested.  I like to ride them outside whenever possible, both in the outdoor arena and just around the ranch.  The extra bonus is that you will both enjoy the diversion!  See you next week.  JD
Posted by Jackie Davenport at 9:16 PM 0 comments

I want to tell you about a mare I once owned and trained named Smoothsational.  I bought this mare when she was two years old and broke her out myself, which was easy.  I showed her successfully for two years or so and really enjoyed riding her, then I leased her to one of my students.  For the rest of her working life she was leased and successfully shown by my teenage clients.
This little AQHA mare did everything.  Hunter, Western Pleasure, Equitation.  She did Showmanship, Trail, Western Horsemanship and Western Riding.  She was also good out on the trails.  She loved horse shows, always jumping in the trailer to go.  She stood patiently for her many baths, even when it was cold outside.  And, she never minded being clipped until the very end of the season came - then enough was enough!
I called this mare Sadie.  She loved her job and won at everything she did.  When the horse show days were long, she'd just take a quick nap and be ready to go again whenever asked.  I used to laugh because she would eat anything the kids were eating, even bologna sandwiches.  She took everything in stride, never worrying or fretting.
Truth be told, Sadie was a quirky mare.  Anyone involved with Sadie needed to know and respect her quirkiness.  If Sadie had a halter on (preferably with a short catch rope) she was the nicest mare you'd ever want.  But when she was free, she was hell-on-wheels.  She loved to spin around and kick with both back legs when turned out.  Sadie would only be caught on her own terms.  She always had a sense of herself and the devil take the hindmost when she was "free".  And yes, I did try to break her of this but it was to no avail.  We even tried roping her but that did no good, she was too smart.  Sadie was her own horse.
Yet, I have never had a horse with a better work ethic.  She knew her job and loved it.  She also knew when she was free and loved that as well.  Sadie was one of a kind.  She always took good care of whoever was riding her and I allowed her to be her own inimitable self.
Sadie was just one of the horses I considered myself priviledged to have trained and worked with.  When I decided to retire her, I found a really good home for her and she is much-loved by her owner.  She has a wonderful life.  It was my way of thanking her for all she did for me.  See you next week, JD
Posted by Jackie Davenport at 9:40 AM 0 comments

For me, one of the simple joys in life is watching good horses doing a good job at what they are trained and bred to do.  Horses that clearly enjoy what they are doing and exhibit beauty and athletisism in their movements.  Horses and riders working together as a total partnership.
This brings such pleasure to me.  Watch these fine horses in whatever discipline they do, whatever it be: Trail, Reining, jumping (I particularly love to watch good Hunters), dressage, Western Pleasure or whatever.  Horses working cows, whether it be cutting or working cow or roping, are also some of my favorites.
Broaden your interests out a little and it will make your whole horse experience even richer and better than it already is!  See you next week. JD 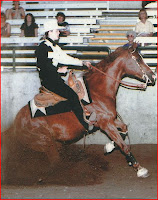 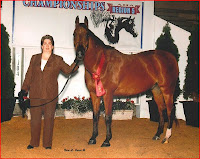 Posted by Jackie Davenport at 10:20 AM 0 comments

I've been thinking alot about responsibility lately.  There are all the obvious aspects that we all know, such as getting up in the morning and getting your work done.  Responsiblity to yourself, your family and so on.
But I'm thinking about how we do things with horses and the horse business in general.  Every day the way we do things in public and private affects the way we, as horsemen, are perceived.  I think being responsible horsepeople means seeing a bigger picture.  Considering everything with the thought "is this the image we want people to remember?"  Can we sustain a way of doing business that encourages, not discourages, new riders?
So often, I hear about incidents that make me question the ethics that were involved.  Was a person sold a horse that was really right for them?   What about the new owner's goals?  How about the horse? If the horse fails with his new owner, what happens to him?   When a horse is intentionally overpriced and misrepresented, not only is it dishonest but the whole industry suffers for it.  Taking horses and riders where they are not prepared to go or somewhere that is just plain out of their league, is a good way to make a lasting bad impression and permanently discourage people.
People will definitely and justifiably complain about being unfairly treated.  It may take a while for them to realize what happened but when they do, they will feel angry and bitter.  As professionals, it's imperative that we advise people wisely and consider their own needs ahead of our own.  This is a heavy responsibility.
There is so much discussion about the lack of new people becoming involved in horses these days.  We must remember how many really cool and interesting things there are for people to do with their free time and recreation budget.  So let's start thinking about repercussions.  A horse sale must be good for everyone involved, not just the seller or trainer or coach.  Let's be responsible to our clients, our horses and this industry that we love so much.  That's the way to grow this industry, and we will all benefit.  See you next week, JD.
Posted by Jackie Davenport at 9:31 AM 0 comments