Many of you know from reading my Facebook page that the great stallion *Simeon Shai recently died.
*Simeon Shai was one of the most extraordinary and famous horses in the Arabian breed and will go down forever in the history books.  His achievements have never been equalled and Shai himself was without equal - absolutely no debate about that.  I believe he was the most beautiful and perfect stallion this breed has ever produced and the judges throughout the world agreed.
But, Shai did not accomplish his feats alone.  His training, conditioning, management and showing by Ron Palelek was unequalled too.  The conditioning program Ron undertook with Shai still ranks among the best of any breed.  In my opinion, it was right up there with that of great race horses.  Let me explain....
Shai and Ron traveled to Scottsdale, Canadian Nationals and US Nationals (winning all) and shortly after US, they flew to Paris where Shai broke the record books as he went on to become World Champion Stallion at Salon du Cheval that December, the first and still only stallion to win all four shows in one year.  The Stallion class in Paris was by far the largest ever held.  I might add that the Europeans threw every horse they could at Shai and Ron and, to make matters worse, Shai was the last to show out of the more than twenty horses and Shai had only been in Paris for two weeks.  So how do you win facing such obstacles?
Part of the answer is superb conditioning and care.  Attention to every last and least detail.  This is something my friend Ron excels at.  Shai was trained by and was absolutely Ron's partner.  Shai and Ron accomplished their amazing feat as a team, not as adversaries.  I often see horses that win in spite of their training, often times disliking or even hating (a human term) their trainers.  This was definitely not the case with Shai and Ron.  I loved to watch Ron handle Shai.  Even in retirement, Shai loved to "show" for visitors.  He was a kind stallion who was also proud and confident.  A stallion who loved attention and people.
I feel so priviledged to have known Shai.  And so fortunate to have worked with and trained his son VP Midnitestranger +// ("Wes").  Wes has many of his sire's traits. He loves children (amazing for a stallion), he is very masculine but easy to handle and he's extremely athletic.  He's curious about everything and has brought much joy to his owner Joanne Salisbury and myself.
Thank you Ron and Shai, for without you both we would have never had the wonderful experience of showing and living with VP Midnitestranger +//.   Shai, may you rest in peace.  JD
Posted by Jackie Davenport at 12:02 PM 0 comments

I believe that the back bone of the horse industry is and has always been average folks taking their kids to shows on the weekends and everday people living out their dream of owning a horse after their kids have left home and they have time to devote to their own wants and goals.
These fine people give up much in terms of time and money, often leaving little or no time for vacations or getaways that aren't somehow horse-related.  Their spare time is spent driving to lessons or shows or watching their horse being worked by trainer.  Their spare money is spend on tack, trailers, clothes and vet and farrier bills.
Likewise, I think this is true of breeding. All breeds depend on small breeders who breed horses for the love of a particular mare, the hope and dreams that new foals bring, and a committment to a certain breed. Often, these breeders truely desire to advance their chosen breed or discipline. Yes, many want to produce winners but unlike the big breeders and barns, they cannot affort to just experiment so these small breeders are often very thoughtful and careful in their selections, which benefits everyone concerned.
My hat is off to all these people because without them, we would not have a horse industry, instead we would have only an elite sport for a small and unsustainable audience.  I fear, and greatly so, that there's a perception that the Arabian breed, along with AQHA, and reiners, hunter/jumpers, dressage and cutting horses are heading down that road to where only a privileged few will have the time or the money required to "play".
This perception is based on some unseemly truths and I really believe that as an industry we must find ways of improving our image and being open and accessible to everyone or we will all suffer.  Talk to you next week!  JD
Posted by Jackie Davenport at 8:07 PM 0 comments

What I love about Wes....What could I talk about in this 100th blog but the equine love of my life?

Well, first of all, he is truly black, no fading and no special supplements to make him darker, he really does live up to the "midnite" in his name VP Midnitestranger+//.  He is also handsome in a very masculine way, a wonderful head with prominent jowls and beautiful eyes, and we all know I'm a sucker for a good looking horse!

Wes has tons of personality and is definitely an individual.  He exhibits lots of pride and yes, that is a stallion trait, but it just comes so easily to him.  And, though he loves to play, he doesn't often show off because he is so comfortable in his "kingdom". 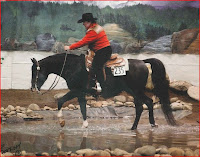 He has always been an excellent ambassador for his breed.  He was asked to "be" the Black Stallion several years ago and we took him to Seattle Center to spend the day in (in!) the IMAX theater, doing demonstrations and letting children touch him between the movie premier showings.

He amused himself by watching the Space Needle elevators go up and down and loved watching the rides go round and round in the amusement park!  Wes has also been volunteered several times in the Arabian Horse Association's T.A.I.L. program where he literall walked up into the stands (that's my Trail horse!) at a show to be petted by severely disabled people in wheelchairs and at a different event, he gave a group of blind children wonderful rides. He was a perfect gentleman, patient and quiet throughout it all and their smiles and laughs were so rewarding.  He loved the experience as much as his audience loved him. 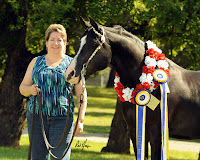 Wes is the most affectionate stallion I have ever known.  He does like to play though, so one must be very aware at all times because he will grab your jacket or shirt and play tug if he can.  Mostly though, he is just busy and curious.  He is just a fun horse to be around.  And, as an added bonus, he loves horse shows and trailer rides.  He's also good on trails and loves to get out and explore.

Wes has always been an athlete, having won many many classes in Trail, Western Pleasure and Western Riding.  He has been shown at Regionals and Nationals countless times and has an extensive record that I am very proud of.  Wes has been a very good Western Pleasure contender, a nationally ranked Trail horse and he absolutely loved Western Riding, along with his rider/owner, Joanne Salisbury, though we don't often get the opportunity to show that class in our area. 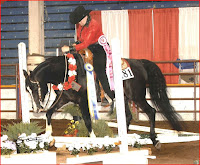 Wes is a good loping horse with an excellent jog and is an easy lead changer.  He can lope a 10 foot circle and make it look easy and effortless.  This is a horse with lots of heart.  He recovered from what could have been a career ending injury for many horses and though it was a long road, he's tough and I respect him for how he kicked up a notch whenever he's been asked.  Part of it is that he loves his job. 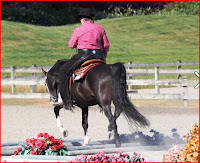 So, Wes is 20 years young this year and looks about 12.  He has some grey hairs but that's the only revealing sign.  We're headed out soon to take him to yet another National show and he keeps on trying hard and we keep on helping him in every way possible.  His farrier and his vet are all strong players on "team Wes"!  He feels great and it's so great to see him playing in his paddock, shaking his neck and rearing - he loves to rear and snap his front feet hooves together with a bang, yikes!  But he loves it.

At 20, he's still playful and at times challenging.  Make no mistake about it, he's not always easy, probably no stallion really is.  But, Wes is a wonderful horse and I have been privileged to train him for so many years.  Happy 20th birthday Wes!  And Happy 100th blog to my many readers.  Follow Wes at Canadian Nationals and I'll see you next week!  JD